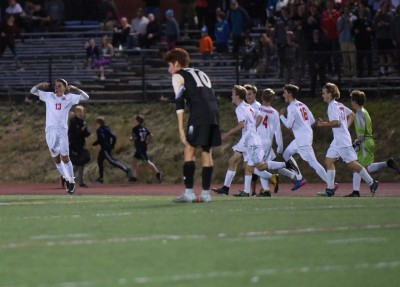 Murphy Bohlmann celebrates a goal Thursday against Battle Mountain. The Sailors won that game, which helped improve their seed in the Class 4A state playoffs. Sunday, they were announced as the No. 21 seed in the tournament.

The Steamboat Springs High School soccer team spent much of the latter half of the season on the bubble with regard to qualifying for the 32-team Class 4A championship playoffs.

In fact, if the tournament had been 10 days ago, the Sailors may have been out.

They had three games remaining at that point, however, and they used those games to change their fate.

The first was a 1-0 loss on the road at Centaurus, seeded No. 7 in the 4A tournament.

Steamboat secured a playoff spot Tuesday, with a 1-0 win at Summit, locking the Sailors into second in the Western Slope League and granting the squad the guaranteed playoff spot that finish entitles.

Steamboat then blasted rival Battle Mountain, 4-1, at home Thursday night, ensuring it wouldn’t just have a spot in the playoffs, but that it would have a better one.

After a month of hovering around 30th in the RPI standings used to slot the tournament, Steamboat’s big finale pushed it up to No. 21 in those rankings, and Sunday, it was awarded that seed, No. 21, in the tournament.

The Sailors travel to play at No. 12 Golden on Wednesday in the first round.

“We’re really excited,” coach Rob Bohlmann said. “Just over a week ago, we weren’t sure how it would all shake out, but we knew our last three games were huge. It’s really impressive what the boys did collectively with those three big games in six days.

“We’re so proud of what they did in those six days, coming out and finishing strong, so we feel really great about that 21 seed.”

The Demons are 11-4 on the season and finished tied for third in the Jefferson County League. The squad was never ranked this season on the weekly chsaanow.com polls, though it was included as a team receiving votes for most of the fall.

Golden made its way through the season with a wide-spread scoring attack. The leading scorers on the team, seniors Han Trznadael and Brian Calouri, each have only six goals. The team did have 15 different players score, however, and was driven as much by junior Douglass Beeman’s 14 assists, good for 10th in the state, as by any particular player’s goals.

Steamboat’s had a similarly wide spread of goals, also getting 15 players to score this year. It’s had a few players score far more, however. Murphy Bohlmann, a junior, had 24 goals in the regular season, setting a school scoring record.

Steamboat’s 62 goals scored rank it ninth in the state.

The team has been solid on defense, as well. It allowed 18 goals during the regular season, 12th in the state.

Thanks to those stats, but even more so to how the Sailors built on them in the past three games, Steamboat’s season will roll on.

“Momentum can absolutely be a huge ally, so we’re going to ride with that,” Rob Bohlmann said. “We gave the team the weekend off for Homecoming, so everyone will be fresh, and yeah, going into training Monday, it will be a great atmosphere.”

The winner of Wednesday’s game will advance to play the winner between No. 5 The Classical Academy and No. 28 Longmont. Battle Mountain was the only other Western Slope League team to make the field. The Huskies, the No. 14 seed, will play at home against No. 19 Northridge.