SteamboatToday.com — It’s a senior-laden team this year for the Steamboat Springs High School girls soccer program, a squad led by players who’ve been on the field since they were freshman. 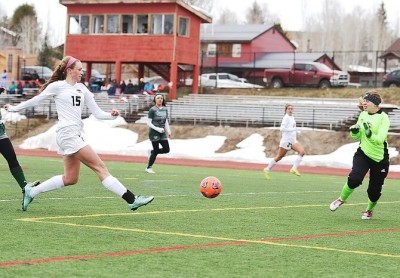 It was a freshman who stole the show Tuesday, however, Delanie Moon scoring a pair of goals and notching two assists in a 5-0 win against Summit in Steamboat Springs.

“She’s stepped in,” coach Rob Bohlmann said. “To have a big presence like that, to play with the composure she’s played with, she’s doing a really nice job.”

The win sets the Sailors at 2-0 on the season and launches them into an early, but crucial, stretch of the schedule. They’ll travel Friday to play Palisade at Colorado Mesa University — which fought Steamboat to a split in last year’s series — then play 0-2 Delta on Saturday, all before returning home for a big rivalry matchup at 6 p.m. Tuesday against Battle Mountain.

Bohlmann said his team’s persistence showed in the win against Summit, a game that went from brisk in the first half to snowy in the second.

The Sailors didn’t get behind the Tigers as much as he would have hoped, but they managed to keep the pressure on, and that led to more than enough scoring.

Moon was central to that cause. Brooke Buchanan opened the scoring for Steamboat, putting away an assist dished up by Moon.

Natalie Bohlmann got the next crack at a goal, scoring on another Moon pass several minutes before halftime.

Moon got on the board herself in the second half, out pacing her defender to get to a deep pass, then beating the keeper for a 3-0 lead.

Fellow freshman Megan Salyer chipped a goal in over the keeper on a corner kick, then Moon was in on one more score, when sophomore Lindsey Anderson beat the keeper, then launched a crossing shot toward the goal. Moon fought in a scrum with two opponents, and the group deflected the ball in.

“She’s super confident and mature,” senior Ocoee Wilson said. “A lot of us seniors came in as freshman, and you make a lot of those mistakes just because you’re scared, you’re afraid to score, so you pass it to a senior. She’s mature enough to understand that that doesn’t have to happen.”

On a team already loaded with experience and hoping for big league results, seizing the opportunity said something to her teammates.

“She’s done a good job of being an asset to the team,” senior Mackenzie Gansmann said. “Her age doesn’t set her back at all.”