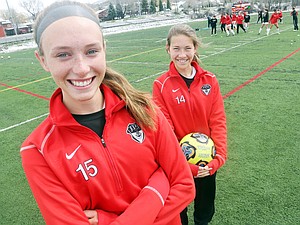 Before the girls soccer season started, Steamboat Springs High School freshman Delaney Moon was assigned a teammate to help aid her, both on and off the field. In this case, that person was junior Brooke Buchanan, who plays a similar role in the attacking third of the Sailors’ offense.

It started with simple things, such as making sure both had candy bars and Gatorade before each game. As time has passed, this camaraderie has helped shape their success on the field, as well.
“We even have a secret handshake before the game to pump each other up. Overall, her and I have connected well,” Buchanan said. “We can play really well off each other just from the relationship we have outside of soccer. I can tell whether or not she wants to take it out wide or drop it, and it’s just a thing where we can understand each other from what we have outside.”

This sort of relationship has also influenced Megan Salyer, the only other freshman to see extensive action on the varsity team this spring. Salyer has bonded with senior Ellese Lupori, a veteran defender for the Sailors. Having someone to go to has been beyond beneficial for both freshmen, who do much more than watch and learn.

“It was really nerve-wracking at first; then, it kind of got more comfortable as the season kept going. I was really afraid of them being mean to me or not accepting me on the team, but they definitely did,” Salyer said about the upperclassmen. “I still feel like a little freshman, just because I’m little in general. But, I definitely feel I am part of the team instead of just another person.”

Between the two freshmen, Moon is the one who gets the most attention, considering her position. Steamboat is 12-1 and undefeated in league play heading into Monday’s 6 p.m. game at Battle Mountain, which will lock up the outright Western Slope crown with a Sailor victory. Moon has been a key piece in getting them into place for a league title: She is fourth on the team in points (23) and tied with seniors Natalie Bohlmann and Mackenzie Gansmann for most goals scored (nine).

“I didn’t think I was going to have that much success, but it’s been really exciting,” Moon said. “You always have to be on top of it. You have to come in confident and know you have to play well. If you are not playing well, you have to take it on yourself to get back out there and play better.”

Salyer, an outside defender, may not put up the statistics as her freshman teammate, but she has been no less important for the Sailors. If anything, her success might be one of the biggest plusses for Steamboat this season, considering the amount of defenders it lost from the 2015 roster.

Salyer’s ability to step in and play on the outside has allowed sophomore Keelan Vargas to exclusively manage the middle of the defense, a unit that has eight shutouts this season and has only allowed double-digit goals once, coming in the only loss (2-1 in overtime to Centaurus).

“She is super quick and drops back fast and listens really well,” Lupori said about Salyer. “She also has a good attacking mentality, which is something our team is tapping into, having our outside Ds come up and help with the attacks. It’s definitely a big role to take on, especially as a freshman.”

Both girls entered their freshman seasons expecting to spend most of the time playing junior varsity. Instead, they’ve been asked to grow up in a hurry and are established, key pieces of the varsity squad as it enters the final week of the regular season.

And with eight seniors set to graduate this spring, Moon and Salyer understand their importance is only going to grow in the coming years.

“They have the technical ability with the ball. They understand the game well,” Steamboat soccer coach Rob Bohlmann said. “You got to make sure that everybody is speaking the same language and speaking it fluently. So, with them coming in, it has worked really well. It’s been cohesive. It’s kind of made things work.”