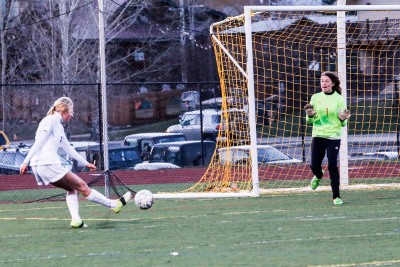 The first game of the year found the Sailors in Glenwood Springs with early goals and what seemed to be an easy game in hand. That game however turned from a 5-1 game to a 5-4 game in less than 10 minutes. Thursday night, both teams had this in mind, but it was the Sailors who recognized that a comeback can only happen if you leave the door open, and Thursday night the door for the Glenwood Demons was never opened. With two early goals from distance junior Jordie Floyd showed why she is willing to take a shot from just about anywhere on the field. Assisted on both goals by fellow junior Natalie Bohlmann, Floyd was able to strike two goals low and hard from distance that Glenwoods Keeper was unable to control. Glenwood was able to hit a free kick home from just outside the box in the 15th minute, that would prove to be the only goal for the Demons on the night. The Sailors further extended their lead in the first half when Natalie Bohlmann hit home a loose ball in the 33rd minute.

The Sailors proved they were able to ping the ball around in the midfield and free up strikers all night long on balls through the Glenwood back line. “Tonight, where we really found success was spacing behind them,” said Coach Bohlmann. “We were a little forceful, but it was really inviting for our players to look in and get behind them early.”

It was Maggie Henry who was able to slot home one of those through balls, after out sprinting the Glenwood defence to score her first goal of the season. Floyd capped of her hat trick on the night with the Sailors 5th goal on the night in the 65th minute.

Steamboat is now tied for second in the league with a 4-1 record, with only Battle Mountain (4-0) ahead of them at the top of the league.

The Sailors will now travel for a pair of Games in Delta on Friday and Saturday, taking on Delta Friday night and a non-league game against Cortez Saturday in the neutral location at Delta.