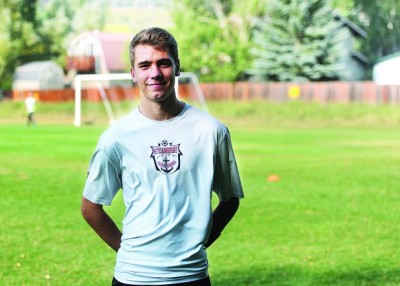 STEAMBOAT SPRINGS — Steamboat Springs High School head soccer coach Rob Bohlmann was out on the soccer field, shooting balls at a line of goalies which came from either side, running through a footwork drill before trying to save the two shots he took at them.

He wasn’t about to interrupt a drill for an interview; it could wait. And even when he did talk about the Sailors soccer team, he tried not to set any premature expectations.

“We’re not about expectations. We’re about working as hard as we can to become the best version of us,” Rob said.

Part of that is teaching leadership skills, not just to a set group of seniors, but to everyone, which is why the Sailors went on two trips this offseason to work on team building.

Twenty-six Sailors went to San Diego during the summer, partaking in beach training, scrimmages and a side of ocean-specific activities like surfing.

For seniors like Murphy Bohlmann, the San Diego trip was an opportunity to meet the freshmen and bond with the teammates he knew from last year.

“You also learn a lot about your team there because there are new kids coming in from middle school and stuff,” Murphy said. “So, it’s big in that aspect because you meet new people.”

The San Diego trip was optional to anyone who wanted to join, but the Mount Zirkel Wilderness Area camping trip later in the summer was a long-standing tradition that most wouldn’t want to miss.

“It started years and years ago with one of our assistant coaches who was an avid triathlete and fitness guru,” Rob said. “We were trying to put together something that involved preseason fitness and team building, and we came up with camping up in the Zirkels, and we’ve built upon that. It’s not just the fitness component, but just as much the team building.”

A total of 16 juniors and seniors went on the camping trip to the Zirkels. The way Rob talks about the trip makes it seem almost sacred to the team, but he does mention one of its main team-building exercises is carrying a dead tree up Lost Ranger.

“The tree kind of tests you mentally. It’s a long hike and you come to a lot of false peaks,” Murphy said. “And it’s kind of just a good metaphor for life. You’ve got to push through it and have the right mentality for it.”

Murphy said the trail is nine miles up, and the team would carry the tree up for almost half of that.

While the team carries the tree up the mountain, Rob and the other coaches observe how different members of the team approach the challenge.

That’s why Rob is also a believer in keeping the Varsity roster fluid, because people may take on different roles throughout the season as he watches them grow.

The Sailors finished last season with a record of 12-5-1, a season-best since 2011, falling to The Classical Academy in the second round of the Class 4A state playoffs.

“Last year was very successful — two big highlights that started with a low spot, and the low spot was our game on the road at Glenwood,” Rob said. “That was one of our days that didn’t go as planned, so you come away from losses — it was a good turning point. The bright spot was the last game of the season against Battle Mountain and our first playoff win in a few years after that.”

That low spot, a 4-3 overtime loss to Glenwood last year, Rob points out, happens to be the Sailors first regular season match this year Thursday.

Murphy, last season’s top-scorer, wears a wrist brace as he dribbles the ball around the cones at practice. He shattered his wrist three months ago in a soccer game and says that he should be cleared for contact by the Glenwood game.

Which is good, because he’s ready, and so is the rest of the team.

“I’m excited to see just how great we can be,” Murphy said. “To see what we can do because it’s kind of a team we’ve been building for all of my four years. It’s always good to see how you improve from years’ past.”