End of the road: Sailors fall in state quarterfinals 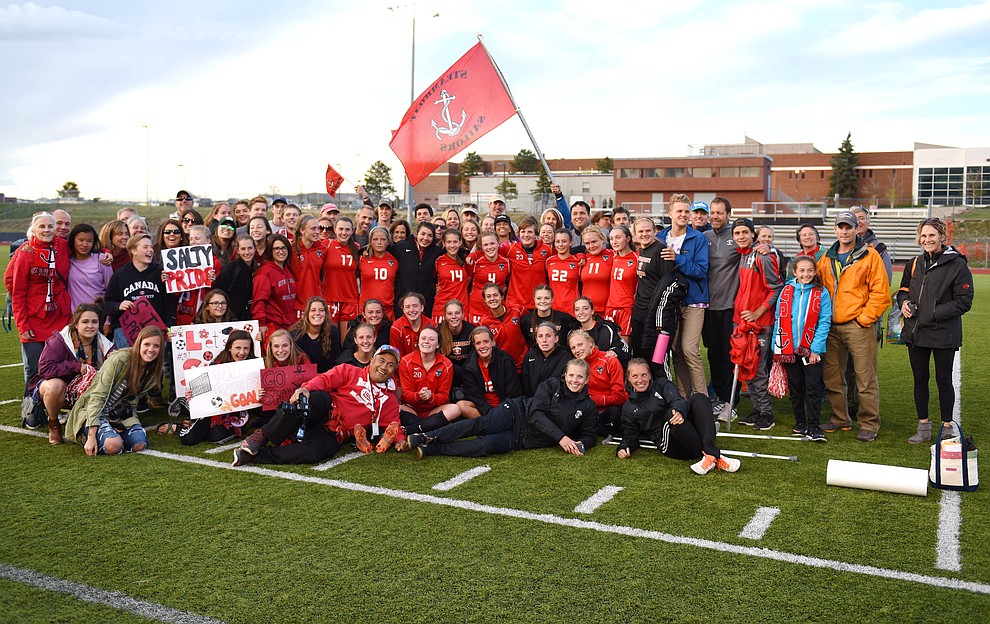 SteamboatToday.com – Monument — The best season of Steamboat Springs High School girls soccer in the past 15 years came to an end Thursday night, the Sailors shedding tears and sharing hugs with teammates, friends and family as the sun set at Lewis-Palmer High School.

The Steamboat Springs girls soccer team lost Thursday in the quarterfinal round of the playoffs against No. 1 Lewis-Palmer Rangers.

The Rangers overwhelmed Steamboat with a disciplined defense and a squeakily efficient offense, cruising to a 3-0 win that handed Steamboat only its second loss of the season, this one in the quarterfinal round of the Class 4A state tournament.

“It was just such a good season,” Steamboat senior Mackenzie Gansmann said. “It’s crazy to think it’s over.”

The story of the season started years ago. Some of Steamboat’s eight 2016 seniors have been fixtures in the varsity lineup since they were freshman, and many others took on important roles as sophomores.

The team missed the playoffs when they were sophomores. They contended it was a statistical mistake with state organizers that left them out, but even so, it accounted for a rare and heartbreaking lapse for the program.

The class and the team bounced back with two of the best seasons in more than a decade, however, breaking through with a win in the state playoffs a year ago, then piecing together even stronger play this spring. The team beat its main Western Slope League rival, Battle Mountain, twice, won the league for the first time since 2006 and made it to the state quarterfinals for the first time since 1999.

The Sailors, 16-2, lost only once in the regular season, and it took double overtime for a team to accomplish that.

“It has to come to a close,” Steamboat coach Rob Bohlmann said, “but the success along the way — the growth, the family that this group was — was just tremendous. They met a lot of challenges and accomplished a tremendous amount.”

The end of the story was written Thursday, the tale told by the quick feet and unmatched precision of Lewis-Palmer, the No. 1-seeded team in the 32-team state tournament.

The Rangers dominated possession throughout the game, generating plenty of scoring opportunities, especially in the first half. As important as anything, that control destroyed any chance Steamboat had to counter.

“Part of our success has been being able to find those sprints in and behind the defense, and the way they would slide and step, they played compact as a group and really didn’t allow us to get behind,” Bohlmann said. “We tried to use more combination play to get behind, but they defended that really well, too.”

Steamboat was shutout for the first time all season.

Another, later in the first half, showcased as well as anything the muscles the Rangers could flex. Brianna Alger, a junior and third in the state in scoring, broke free with the ball, laid down a silky smooth move to ditch her defender, then put the ball away in front of Steamboat goalie Ocoee Wilson.

Wilson had been beaten just eight times this season before Thursday’s game.

“My foot was close to getting on it,” she said, “but her shot was just placed so well.”

Lewis-Palmer was in one-on-one situations and strong working as a team, too, scoring the first and third goals — a late second half strike from Ellie Crisler — by playing from the sideline into the box for an easy put-away right in front of the goal.

“That’s a very easy ball for them to finish and a very hard ball for me to save,” Wilson said. “They showed why they’re No. 1.”

The Rangers are attempting to make the state finals for the second consecutive season, and advance to play Saturday in the semifinals against Mullen, the No. 13 seed that pulled off an upset Thursday of No. 5 Air Academy.

No. 3 Windsor will play No. 7 Valor Christian in the other semifinal.

For Steamboat, the end of the season meant a field of red eyes and wet cheeks, but before the team even boarded the bus, that pain began to become something else.

Coaches waved the fans and parents filling the stands down onto the field, and Bohlmann gathered them together for a photo — Steamboat’s soccer community pulled into a huddle, even as the Lewis-Palmer fans were driving away and the Rangers’ players and coaches were long gone to the locker room.

They pulled tight, coaches and athletic trainers, seniors and freshman, friends and family, posing in the fading light on their opponent’s stadium, arm in arm and grinning wide.

It may have been a night to forget, but was a season — an era, even — to remember.