STEAMBOAT SPRINGS — It wasn’t the way the members of the Steamboat Springs High School girls soccer team wanted to open the week, and there is no doubt the players will be looking to turn things around in a hurry after being upset by Eagle Valley in the team’s first game after spring break. 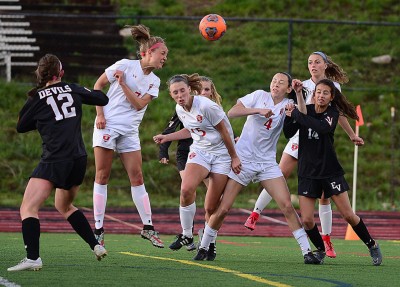 Steamboat Springs sophomore Sydney Graham heads the ball toward the goal in the second half of Tuesday night’s game against Eagle Valley at Gardner Field.

“Coach talked a lot about perseverance,” Steamboat junior Izzy Rillos said after the game. “When it’s really hard is the time to push through and have the confidence that we can do it. We have to have confidence in ourselves and each other and keep in mind that we still have a chance to go to playoffs.”

Tuesday’s 2-1 loss to the Eagle Valley Devils, who came in to the with three wins in the Western Slope Conference including two against Rifle, wasn’t the way the players were hoping to start the last week of the regular season.

The Devils came out hot getting first-half goals from Zoe Booth seven minutes into the contest and another at the 13 minute mark after Eagle Valley’s Uma Nanin was able to win the ball near midfield and then pass it forward to Sofia Aguilar who beat the Steamboat defense for what turned out to be the game-winning goal.

Despite outshooting Eagle Valley in the first half 8-6, Steamboat was unable to find the back of the net.

The quick start allowed Eagle Valley to play a more defensive game in the second half, electing to drop numbers back with hopes of preventing the Sailors from climbing back into the game. Steamboat’s Sydney Graham manged to score at the 58 minute mark to give the Sailors hope. But despite the home team’s eight second-half shots, with five on goal, the Sailors could not find the equalizer. The Eagle Valley defense was able to shut the door in the final 22 minutes of the game and escape Steamboat with the win, improving the team’s record to 6-8 overall, and 4-7 in league with one game remaining against Summit.

Steamboat was in the 27th spot headed into the game and will need to remain in the top 32 for a shot at the post season. The team will finish out the week Thursday against top ranked Glenwood Springs in Glenwood, before heading home for the final game of the regular season against Centaurus. That game is scheduled to begin at 5 p.m. Saturday, and it will be senior night for the Sailors.