GYPSUM — It has been a season of fits and starts for Eagle Valley soccer, but Tuesday night was another start. 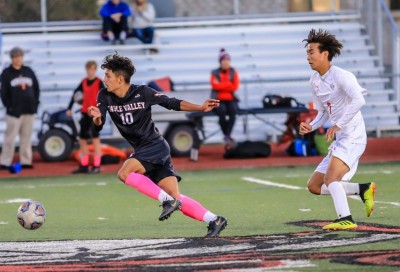 The Devils knocked off Steamboat Springs, 4-1, at John Ramunno Field in Gypsum for their first season sweep of the Sailors since 2008.

While 2008 was a long time ago for both the Devils and the Sailors — that was the year of Eagle Valley’s sole 4A Slope League title with Steamboat winning the next fall — Tuesday’s win continues the positive improvement that has been the goal for the local 11.

“Mostly, what we’re just trying to find is consistency,” Devils coach Maggie Sherman said. “That’s been a struggle throughout the year. We found what we wanted tonight, and hopefully, we’ll keep that in our head.”

After emphasizing a quick start, Steamboat’s Oliver Capparelli scored in the third minute, giving the visitors an early 1-0 lead.

“We had to calm down,” Devils junior Armando Munoz said. “We had to take our time and get some easy passes in open spaces. Once we did that, the easy touches got us out on the wing.”

And that led to freshman Josh Escobar equalizing the match with a beautiful header.

Munoz struck on the rebound off teammate Alexys Ramos’ free kick just before the half for a 2-1 lead.

The Devils took over during the second half, and Phelan scored on a slick feed from Harrinson Hernandez. Denilson Sandoval ended the night.