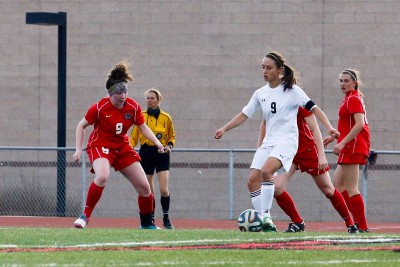 The Sailors traveled to Eagle Valley Tuesday for the closing game of a back to back series with the Lady Devils. The Sailors were coming off a strong 2-1 win Thursday night against the Devils and knew going in it was going to be a difficult game. Eagle Valley is always strong at Hot Stuff Stadium and they came out ready for a tough game. The Sailors arrived ready to play and came out strong with 6 strong attempts at goal in the first 20 minutes, but were just not able to find the back of the net. It was finally a dead ball foul from 30 yards that help the Sailors find their first goal. The kick, taken by Junior Jordie Floyd, took a deflection inside the 18 and found the crashing Natalie Bohlmann’s head to be knocked home.

The Devils fought back and were able to find the back of the net twice, with goals by Jesse Adams in the 26th minute and Mariel Gutierrez in the 42nd minute. In the second half a strong showing by Goalkeeper Ocoee Wilson kept 2 big chances for the Devils out. With 15 minutes left in the game, the Sailors poured it on with shots from all over the field. Many of Steamboat’s shots were more of desperation than viable chances, but the desire to get forward was there. With just 1 minute left, Steamboat was awarded a corner kick. With all 11 players, including Goalkeeper Wilson, inside the Devil’s 18 the corner was an intense moment in the game, but the Sailors were unable to capitalize.

“Both goals from Eagle were really good,” Sailors coach Rob Bohlmann said. “They did well with their chances. It was definitely one of those games where the momentum shifted during the game. There was a lot of things that were happening. We showed urgency and were definitely putting them under pressure. Eagle did a great job to weather the storm. We did a good job to create opportunities.”

The Sailors will be back in action at home Thursday night to take on Glenwood Springs. Game starts at 6pm at Gardner field.