Devils flip the script, down Sailors, 4-2 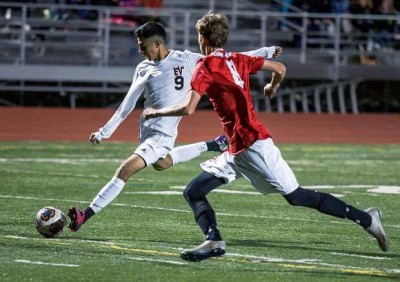 Photo by Justin Q. McCarty | Special to the Daily |

Eagle Valley’s Paco Serna fires off a shot on goal while being defended by Steamboat Springs’ Will Beurskens during their game Tuesday night in Gypsum.

Eagle Valley doubled up Steamboat Springs, 4-2, on Tuesday night at John Ramunno Field in Gypsum during the first leg of a round robin, which will determine the 4A Slope championship.

With Battle Mountain winning easily in Summit County, 5-0, on Tuesday, the Huskies (8-1 in the Slope), Eagle Valley (8-2) and Steamboat Springs (8-2) all sit at 24 points. The Devils meet up with the Huskies in Edwards on Thursday at 6 p.m., with the Sailors coming back to Eagle County to face Battle Mountain a week later on the final day of the season.

“It’s super-important because you don’t get these wins without being good,” said Eagle Valley coach Bratzo Horruitiner, who has overseen the Devils’ rise during the past four years. “It’s building confidence and growing. I’m very proud of the growth.”

Eagle Valley had 10 days off since its last game to prepare for the Sailors, and it used the time well, working out kinks on the defense and midfield. While that work proved decisive, the Devils had to have felt a sense of deja vu after Steamboat Springs scored the first goal of the game off a quick restart.

With a foul in Eagle Valley’s end, Charlie Beurskens didn’t give the Devils’ defense time to organize, quickly kicking the ball to Jack Salyer, who buried his shot. That was the exact same way the Sailors beat the Devils in overtime, 2-1, up north in the first meeting of the season between the two teams.

Eagle Valley’s Aaron Ledezma leveled the game with a score in the 34th minute from Noel Ruiz.

And then the machinations began at halftime.

“We talked about exploiting the left wing a bit better, how we need to control the touches and not just use one pass,” Horruitiner said. “We needed to connect through the middle.”

“They are difficult to play,” Sailors coach Rob Bohlmann said. “They’re stingy defensively and they’re quick. They countered nicely and built some nice attacks as well. The key thing is you can’t give up possession when you poke into the attacking end.”

In the second half, Eagle Valley, in fact, capitalized on miscues from the Sailors’ attack and turned them into scores on the other end.

Ledezma roared down the right side and gave his team the lead in the 54th minute.

He celebrated his second goal with a back flip, which is a no-no. He drew one yellow card for that, and, temporarily, a second card, which would have sent him off for the night.

After some discussion, the second yellow for chirping went to another Devils’ player, and Ledezma did not get the gate. After Eagle Valley collectively exhaled, Alex Torres ripped one from the top of the box for a 3-1 advantage. A Beurskens penalty kick halved the lead, but Torres’ second in the 66th minute restored order.

This loss does not eliminate Steamboat Springs, but the Sailors do not control their destiny. Bohlmann’s crew hosts Delta for Senior Night on Thursday and then heads on Saturday to Dick’s Sporting Goods Park for a nonconference tilt against Centaurus.

The Sailors return to play arch rival Battle Mountain on the final day of the regular season in what will be a meaningful game, regardless of the result of Thursday’s Eagle Valley-Battle Mountain encounter.

So for whom are the Sailors rooting on Thursday when the Devils and Huskies meet?

“We root for Steamboat on Thursday and Saturday,” Bohlmann said. “I’m sure (Eagle Valley-Battle Mountain) will be a heck of a game. Our focus is on us.”

In the meantime, the Devils are feeling good about Thursday’s game, having beaten the Huskies, 1-0, in Gypsum earlier this year.

“Big game. Really big game,” Torres said. “It’s not just a physical game. It’s a mental game. We have to be prepared mentally. We have to play hard, and hopefully a good outcome will come.”

Original Article can be found here from VailDaily.com

Vail Daily Sports Editor Chris Freud can be reached at 970-748-2934, cfreud@vaildaily.com and @cfreud.

Photo by Justin Q. McCarty | Special to the Vail Daily