D’Evelyn (4) takes down Steamboat in First Round of Playoffs 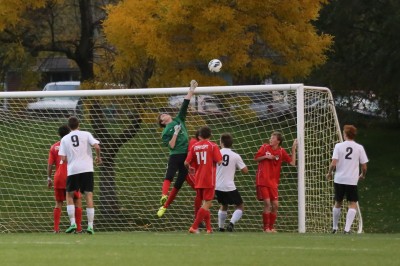 The Sailor Boys soccer season came to an end on Wednesday night at Lakewood Memorial Field, at the hands of a very athletic and fast countering D’Evelyn team. The Sailors always knew coming in as a 29 seed that it was going to be an uphill battle, and taking on the the JeffCo champions in the first round was a tough order.

The opening kickoff showed promise for the Sailors, but shots high and wide early just didn’t find their marks. It was the Jaguars that opened up the scoring first when Junior Giovanni Franzese scored his first game of the season in the 14th minute. Sure, it was a let down for the Sailors, but off one of the best left footed shots of the season, Charlie Beurskens buried a shot from 25 yards out after taking the ball past two defenders, to bring the game even a 1 a piece after 22 minutes.

The lead was very short lived when 1 minute later, when Sophomore Wesley Tedstrom slotted the ball past Steamboat Goalkeeper Andrew McCawley, putting D’Evelyn up 2-1 with was would be the winning goal. Although the Sailors did have a few chances in the first half, they were unable to get through the 5-3-2 defense set up by D’Evelyn. Develyn’s senior Andreas Johnson then came off the bench to and hit home two unsaveable goals in the 27th and a heartbreaking goal in the last 40 seconds of the half.

The second half started much the same as the first, with Steamboat having two strong chances to score, but unable to put shots on net. With 4 corners in a row, and a few other chances, it just didn’t look to be the Sailors night. One Sailor stepped up big for the Sailors in the second half, Goalkeeper Andrew McCawley had 16 saves including 3 huge in traffic punches and 3 break away saves on the ever attacking D’Evelyn offense.

“Three of (the goals) were basically unsaveable,” Head Coach Rob Bohlmann. “We felt like the score, that doesn’t tell the underlying story of the game. They were obviously the better team, but we played with them and the boys really adjusted, tweaking things going into the second half. We really took it to them.”

In the end, it proved to not be the Sailors night, and the Steamboat program end their 2014 season 9-6-1.

CHSAAnow.com: D’Evelyn boys soccer gets key contribution off the bench in win