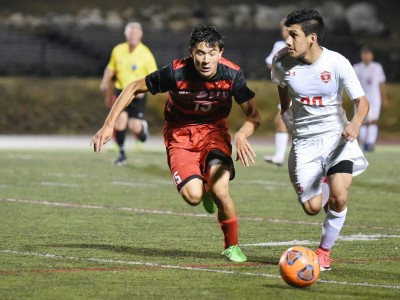 Steamboat’s Daniel Lopez pushes the ball up the field Thursday against Glenwood Springs. The Sailors controlled the pace for much of the game and went on to win their first Western Slope League contest of the season, 4-2.

The Sailors were plenty warmed up when their time came, scoring twice early and cruising to a 4-2 win against Glenwood Springs. The result gives the Sailors a 1-0 start to the Western Slope League schedule.

The result gives the Sailors a 1-0 start to the Western Slope League schedule.

Murphy Bohlmann led the Sailors’ attack, scoring both of those first half goals, then putting the finishing touches on a hat trick by burying a penalty kick late in the second half.

Steamboat will play its third consecutive home game to start the season at 11 a.m. Saturday against Palisade.