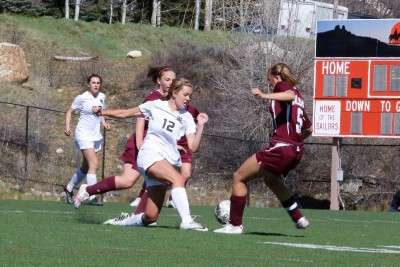 Steamboat Springs’ Jordi Floyd tries to dribble by Palisade’s Brier Youngfleish in the second half of the Sailors’ 1-0 victory on Saturday.

From about 20 yards out, Sailors junior striker Natalie Bohlmann wound up her powerful right leg in front of Palisade’s Madison Caster and let one rip in the 49th minute. Bohlmann’s strike found the bottom left corner of the Bulldogs’ goal, just out of the outstretched arms of the keeper, and gave the Sailors a 1-0 advantage.

That was all it would take.

“In general, I think their defense was the tipping point that really stifled us,” Steamboat coach Rob Bohlmann said. “We didn’t really have the possession we’re used to. Things weren’t as sharp and crisp today. But, when that’s not happening, at least they found a way to kind of grit it out.”

Steamboat senior defender Carolyn Walters could only play a little more than a half as she rests an injury, but other Sailors back line players like Savannah Bauknecht and Katie Brodie helped keep the Bulldogs strikers at bay. Even Steamboat forward Jordi Floyd saw some action on the back defensive line toward the end as Palisade made one last push.

“With her speed and tenacity, that kind of helped seal the deal,” Bohlmann said about Floyd’s defense.

The game sets the stage for easily the biggest game remaining on the 4A Western Slope slate.

Battle Mountain, which edged the Sailors in overtime five days ago, took care of business on Saturday, beating Eagle Valley, 6-4. The Sailors-Huskies rematch will be on Tuesday at Gardner Field. If Steamboat wins, it will solidify itself in the league’s No. 2 spot and keep Eagle Valley in third.

Despite the loss in Steamboat-Battle Mountain Round 1, Bohlmann said his team didn’t walk away dejected.

“We measure our effort,” Bohlmann said. “When you come away with it like that, it was just such good and high-quality play. The result doesn’t always go your way, but what is in your control is your effort and quality.”

That game will kickoff at 6 p.m.