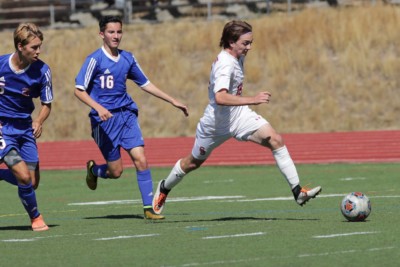 The Steamboat Springs High School boys soccer team passed one big test Saturday only to set up another.

The Sailors knocked off previously undefeated Centaurus 2-1 at Gardner Field in Steamboat, piecing together their best 80 minutes of soccer so far this season.

Now, the squad, 6-1, will play Battle Mountain at 6 p.m. Tuesday in Steamboat in a game that, though early in the season, could have lasting league championship ramifications.

The Sailors were cautious at the thought Saturday, moments after finishing what was, to this point, their biggest win of the season. They wanted to appreciate it, to relax, even if only momentarily, after a job well done. But Steamboat’s seniors have never beaten Battle Mountain in their six attempts.

They’ll get the chance Tuesday, and Saturday, they couldn’t help but think about it.

“It would mean so much to the Steamboat soccer club,” senior Alex Coffey said Saturday. “We want to enjoy this win. We don’t want to overthink this next game and get too out of ourselves. We want to focus on what we can do better, what we can do to be better than Battle Mountain.”

Saturday’s game offered a fine blueprint as to how such a victory Tuesday could be possible.

Steamboat played consistent, responsible soccer, showing flashes of aggressiveness when necessary. Andrew McCawley was a beast in goal, stopping 14 shots, and though one second-half lapse and a lighting quick goal from Centaurus freshman Christian Nunez kept things interesting to the end, the Sailors clung to control.

They shifted to a 4-4-2 formation and rode out the final minutes.

“Our approach into the game was great,” Bohlmann said.

Steamboat opened the season with a 7-3 loss to Mullen, a rout keyed on two goals that were scored inside the season’s first 90 seconds. Saturday, in its only other regular season game against Front Range competition, the Sailors performed miles better.

They got their first goal from Ross Vanhara, who drew a penalty kick in the waning seconds of the first half. He put it away past the keeper’s right hand.

Cruz Archuleta then made it 2-0 midway through the second half. A pair of Warriors defenders leapt to block a Steamboat throw in, but the ball skimmed by their heads. Archuleta got on it, waited for the keeper to come out, then chipped it over and was celebrating even before the bouncing ball nestled into the back of the net.

Battle Mountain, 4-2, hasn’t had its strongest start to the season. The Huskies lost a league game against Eagle Valley 2-1 in overtime, and lost again, 6-0, Friday against Class 4A powerhouse The Classical Academy.

It’s hardly a game where the records need to be thrown out, however. Steamboat currently stands alone at the top of the league in Western Slope games, but Battle Mountain and Eagle Valley are just one game back. The Huskies have tormented the Sailors in recent seasons, winning two of those last six games in overtime.

It would mean the world to Steamboat to change that fate.

“We want to beat Battle Mountain at home,” Coffey said. “It’s time that we beat them here.”