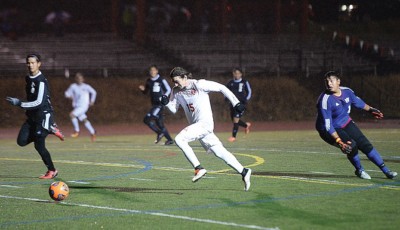 Steamboat Springs Ross VanHara races after a ball in the second half of Tuesday night’s game against Eagle Valley at Gardner Field. Photo by John F. Russell

With just four minutes remaining in the second overtime period of Tuesday night’s soccer game against Eagle Valley, junior Will Beurskens let a shot fly from 30 yards out that ignited a celebration on the Steamboat Springs sideline.

“I had a little space, so I took a chance,” Beurskens said after the game. “To tell the truth, I really don’t know what I was thinking when I took the shot … I think it’s the biggest goal I’ve ever scored in a game.”

That shot was driven toward the Eagle Valley goal, and despite a strong effort from keeper Ever Ortiz, it found its way into the back of the net just under the crossbar.

In Other News: Steamboat TV News for October 10th

For Steamboat, it was the perfect way to end a game and extend the team’s winning streak to four games with a 3-2 win.

“It was a tough way to lose the game,” Eagle Valley coach Bratzo Horruitiner said after the game. “But you have to give it to Steamboat. They are a great program, and I have a lot of respect for Rob (Bohlmann) and what he does here. They played really hard tonight, and they came away with the win.”

The game was huge for both teams.

With a win, Eagle Valley would have climbed into second place — a half game ahead of the Sailors in the Western Slope League. For the Sailors, it meant keeping pace with Battle Mountain.

The Sailors are hoping to pull off another big win next Tuesday against Summit in the final home game of the season and set up a showdown with Battle Mountain in the regular season finale on Oct. 20 in Edwards.

If Tuesday night’s game was any indication, the path to a league title will not be easy, and Steamboat will have to continue winning just to get a shot. Battle Mountain (8-2) is scheduled to play Glenwood Springs (4-6) on Thursday night.

The showdown between Steamboat and Eagle Valley was a soggy battle at Gardner Field, as a driving rain, which started just minutes into the game, made conditions difficult for most of the night.

The first goal came after Steamboat’s Lane Salyer chipped a high pass over the top of the Eagle Valley defense, and Cruz Archuleta made a well-timed run to find space behind the defense that allowed him to head the ball just over the outreached hands of Ortiz just three minutes into the game.

The early lead, however, didn’t last. Eagle Valley netted the next two goals.

The first came off the foot of Andres Morales at the 13-minute mark to tie the game at 1-1. Eagle Valley took the lead in the 29th minute on a goal from Juan Garduno. The two goals put the normal aggressive Steamboat players on their heels and allowed Eagle Valley to take a 2-1 lead into the half despite being outshot 8 to 5.

The rain continued in the second half, and Steamboat couldn’t seem to find the shot the team needed to level the score.

Hard shots by Quinn Connell, Murphy Bohlmann and Ross Van Hara just missed the mark. Then with just over 10 minutes left, Sailors coach Rob Bohlmann decided to switch to a 4-3-3 to see if moving more players up front would create the opportunity his team so desperately needed.

“It was a bit of a gamble, but in the end, it doesn’t really matter if you lose by one goal or two,” Bohlmann said after the game.

The move paid off in the 76th minute when Ross VanHara ran the ball down the left side of the field, broke into the 18 and used some fancy footwork to beat a defender in front of the goal before firing a shot into the back of the net. The goal tied the game and gave Steamboat momentum headed into overtime.

Steamboat’s aggressive attack continued in the first sudden-death overtime period. Steamboat had two shots hit the crossbar, and both times, Steamboat missed golden opportunities to put the rebound on the net. Then in the 84th minute, it looked like Steamboat had won the game, but an offsides call negated the apparent goal.

The two teams continued to battle in the second overtime with Eagle Valley taking a couple of shots over the top of the crossbar and sending a dangerous crossing pass through the penalty box.

Steamboat tested the Eagle Valley players the entire overtime period and finally found the shot they needed in the 96th minute off the foot of Beurskens.