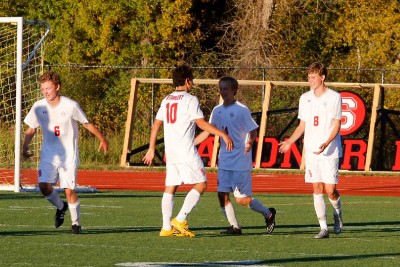 He played a season of varsity for the Sailors’ boys soccer team last year and didn’t score once. When he was younger, playing in youth leagues in Steamboat, he’d score occasionally, but that was never his role, never his gift.

He’ll need to reevaluate his place after Thursday night, when, with some tremendous help from teammates, he unleashed a torrent of scoring against Moffat County, scoring three times to power the Sailors to a 4-1 win.

“I haven’t felt that feeling in awhile. I couldn’t really believe I scored,” Beurskens said. “My teammates just laid out great balls. It would have been hard not to finish them.”

Steamboat controlled the game Thursday and racked up opportunities. A spirited game in goal from Moffat County’s Daniel Moore negated some of those, but the Bulldogs could only slow the Sailors. They couldn’t stop them.

Junior Cruz Archuleta got things started, scoring nine minutes in, and Beurskens took care of the rest, scoring the team’s final three goals. Archuleta assisted the first one. Big brother Charlie Beurskens came up with a brilliant assist for the second one, making it 3-0 before half.

Will Beurskens put his third goal away early in the second half.

“We play together all the time, and I’m so happy to see him excel like that,” Charlie Beurskens said. “He’s a great player, and he deserves the glory.”

The difference, Moffat County coach Harry Tripp said, was in the middle of the field.

He said he was pleased with the way his team pushed on offense when it got chances but was disappointed it couldn’t often finish those surges.

“We had good build up, but then we’d always have one pass get away,” he said.

The Bulldogs did finally manage to get on the board late in the second half, and they did it by skipping that pesky pass all together. Senior Hugo Snyder launched a strike in from 30 yards out to breakup the shutout.

Moffat County slipped to 1-1 and returns to action Thursday at home against Aspen.

Steamboat, meanwhile, improved to 2-0, and the win set the stage for a big home game at 6 p.m. Tuesday against rival Battle Mountain.

“The guys played within themselves,” Steamboat coach Rob Bohlmann said. “It was good. We like our starts. We like our consistency in the first half and it was good tonight.”

Original Story by Joel Reichenberger found in the Steamboattoday.com

Watch the Full Game thanks to to ESPN Radio: Watch Now (Game starts at 37:37 mark)