A Kick to Remember

There was no plan, no pre-game handshake or agreed-upon outcome.

Getting Steamboat Springs High School junior Ben James into Saturday’s varsity soccer game was something that’d lingered in the back of the mind of Sailors’ coach Rob Bohlmann and, even more so, his players, but there’d been no real discussions and there was certainly no consultation with Palisade, Steamboat’s opponent for a Saturday morning clash.

The idea was to get him onto the field if an appropriate situation arose, and with Steamboat cruising toward the end of the game Saturday with a 10-1 lead, that situation presented itself.

Somehow, in the waning moments of a game decided more than an hour earlier, a game in which 11 goals had already been scored, James put away the most important moments before the final buzzer sounded. 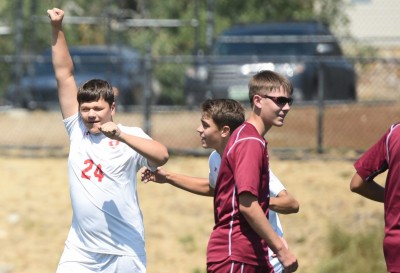 How did it feel?

James was born with Fragile X syndrome, a genetic condition that limits him both socially and physically. For most of James’ life, that diagnosis hasn’t simply kept him on the sidelines when it comes to sporting events. It’s kept him away from the field altogether, typically at home with a video game.

He began serving as a team manager for the boys’ soccer program during his freshman year at Steamboat Springs High School, however, and that, as much as anything else, has helped him overcome some of the hurdles he’s faced his entire life.
He was initially encouraged to participate by his stepbrother, Cruz Archuleta, the team’s leading scorer at the time. He was welcomed with open arms by Bohlmann and the rest of the squad.

He returned to his duties assisting the team as a sophomore and even saw a few minutes of action in a junior varsity game against Palisade. He’s back on the sideline again this year, as well, but the date against Palisade didn’t offer the same opportunity, as Saturday’s JV game was canceled.

Still, as the clock counted down, James’s teammates began hoping they could find a way to get him on the field.
Things were well in hand for the Sailors long before anyone reached for a jersey for James.

The score was 8-0 after the first half, and most of the JV team was already off the bench and into the action, racking up experience against a Palisade team.

The win lifts Steamboat to a 2-0-1 record. They’ll play again at home at 6 p.m. Thursday against Eagle Valley.
With four minutes to go, attention on the Steamboat bench turned to James. He got his shoes tied and his jersey on and was escorted into the game by Murphy Bohlmann with about 2 minutes remaining.

“He’s such a big part of our family, and the moment was right,” Rob Bohlmann said.

“I was ready,” James added.

Steamboat played the ball to James near midfield, and his teammates helped set up the rest. They initially aggressively walled off their defenders, leaving James a lane to the goal.

Without any warning of what was going on, Palisade’s players soon joined in, poking at the ball, throwing up some defense, but allowing James by.

“That was absolute class from Palisade,” Rob Bohlmann said.

Finally, he got the goal, face-to-face with Bulldogs’ keeper Tyler Pike.

It hadn’t been a great game for Pike, a sophomore. The Sailors had scored early and often, with hard shots and softer ones. The last thing his stat line needed was yet another goal. He’d been in that game with James the year before, however, he remembered him and when it came time to play his part in a day that suddenly belonged to Ben James, he didn’t hesitate.
“I have family like (Ben), so I understand,” Pike said.

James blasted the ball with his right foot. Pike offered a spirited defense, a dive toward the shot, but he was late, and it rolled into the net.

In the scheme of the game it was just another goal.

But Saturday, it was plenty more.