GLENWOOD SPRINGS — Well, so much for Glenwood Springs High School soccer struggling to finish in the attacking third. 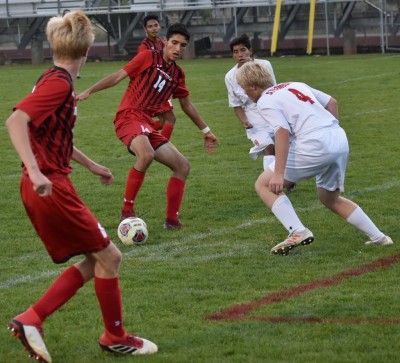 Although the score ended up lopsided late, Steamboat Springs got off the bus and nearly struck quickly as senior Daniel Lopez fired a left-footed shot just under the crossbar that Glenwood senior goalkeeper Carlos Guardado punched away just over a minute into the game, keeping the league match scoreless.

That big save early by Guardado sparked Glenwood as the Demons quickly went on the attack, thanks to some strong runs by seniors German Alvarado and Angel Bernal.

Bernal answered Lopez’s chance with one of his own early, running down the left wing into the box, where he fired an odd-angled shot on goal that Steamboat sophomore goalkeeper Axel Kovach stopped.

A few minutes later, Glenwood struck first as Bernal fired a shot inside the left post from the top of the box, taking advantage of a failed clear by Steamboat. The ball found the foot of junior midfield Carlos Rodriguez, who then found sophomore and fellow midfielder Reid Swanson pushing up the field, who slipped the ball to Bernal for the goal at the 26:37 mark of the first half.

“I liked the way that Angel was taking guys on,” Glenwood head coach Wayne Smith said following the win. “We were trying to give the defense a number of different looks, so we moved guys around early and it paid off.”

Holding a 1-0 lead, Glenwood upped the ante, applying a ton of pressure to Steamboat’s back line in the attacking third.

With 14:02 left in the first half, Steamboat was forced into an error in the back half again, this time on a turnover off of a pass back from a defender to Kovach that didn’t quite reach the goalkeeper, allowing Glenwood senior Justin Garces to jump on the loose ball and slip a shot past Kovach for the 2-0 lead.

Minutes later, the Demons nearly made it 3-0 in the first half as Alvarado beat a pair of defenders to get a shot off from just inside the box. Unfortunately, the footwork didn’t reward the run as Alvarado’s shot struck the left post and stayed out, keeping it a 2-0 game.

Late in the first half, Kovach stood tall for the Sailors, stopping point-blank shots from Alvarado, keeping his teammates in the game as the two league foes went into the half with Glenwood in front 2-0.

That’s when things took a dramatic turn for the Demons.

Coming out of the half, Glenwood’s attack found its footing for good, pouring it on against the Sailors.

Alvarado tried to beat Kovach early in the second half, but the sophomore goalkeeper was up to the task again, stopping the Glenwood senior in close.

A couple of minutes later though, it was Bernal who made it 3-0. Swanson assisted again on Bernal’s goal, this time one-touching a pass to the senior forward for the goal.

Moments later, Garces made it 4-0, taking a cross into the box off the right wing from Alvarado before firing a shot off of Kovach’s hand and into the top of the net.

Then it was Swanson’s turn to get in on the act, beating Kovach with a perfectly-placed shot inside the left post after taking a cross into the box from junior Will Grosscup, making it 5-0 Glenwood with 14:02 left in the game.

Just under a minute later Alvarado made it 6-0, jumping on a misplay by Steamboat to sting a shot into the back of the net with 13:08 left in the game, making it a 6-0 margin.

Two minutes later Alvarado had his second of the game, heading home a cross from Swanson that made it 7-0, before Bernal put the finishing touches on the win with a shot from just inside the box that beat Kovach, giving the Demons the much-needed 8-0 win.

Steamboat Springs (1-8, 1-7) hosts Palisade on Saturday. Sitting at 8-0-2, Glenwood Springs travels to Summit on Thursday for a league matchup with the Tigers.