5 Sailors with goals in Delta to finish long road trip 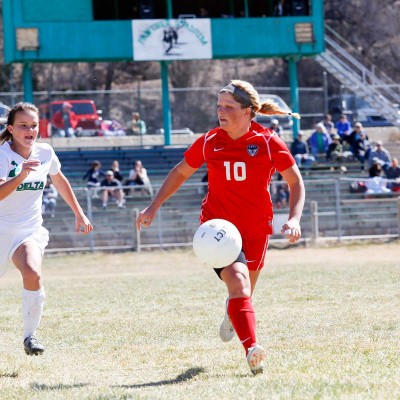 489 miles. That is how far the Steamboat Women’s Soccer team traveled this past weekend to pick up wins in Delta and Palisade. The day after a big 2-1 road win against Palisade, the Sailors traveled south to Delta, CO for another league matchup. The Sailors had expended a lot of energy taking on the Bulldogs, and were in need of a quick rebound the next morning against Delta.

The Sailors came out with a new look for the starting line up and it proved to be a good move. In the 8′, Senior Lilly Turton was fouled in the 18-yard box and awarded a penalty kick. Fellow senior Jordie Floyd, stepped up to convert the PK to put the Sailors up 1-0 early in the half. Just 5 minutes later, Senior Kenzie Gansmann, off of a great switching through ball from Floyd, was able to get behind the Delta defence and put home the Sailors’ second goal of the game. Not to be outdone by their fellow seniors, Ellese Lepori found Natalie Bohlmann at the top of the 18 for a powerful shot to put the Sailors up 3-0 after just 17 minutes.

In the closing minutes of the first half, Delta was awarded a free kick on the left edge of the 18-yard box, and was able to convert the opportunity off of a deflected header to close out the first half with a 3-1 scoreline.

The second half of the game belonged to the Sailors. Junior Brooke Buchanan and Sophomore Keelan Vargis were able to find the back of the net, in the 59′ and 60′ respectivaly.

Steamboat was able to finish out the long road trip with a 5-1 win over league opponents Delta to bring the to 4-0 on the season. The Sailors continue league play when they take on the Battle Mountain Huskies Tuesday night at 6pm at Gardner Field.