4 goals in the first half drive Devils over Sailors

Steamboat Springs High School senior Oliver Caparrelli put the ball down 12-yards in front of the goal. The Eagle Valley goalkeeper, Tirin Cameron, hopped in goal, ready to lunge in either direction upon the penalty kick. 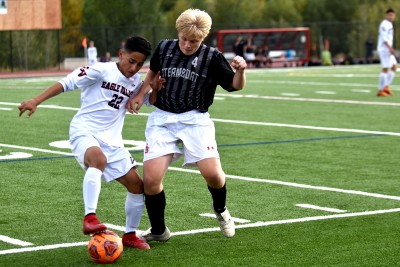 With the whistle, Caparrelli lifted the ball towards the crossbar, out of the reach of Cameron.

The goal brought the score to 2-1 Eagle Valley, giving Steamboat momentum with 4:26 remaining in the half.

“It was nice to get that feeling because, sometimes, we lack that in certain situations,” Eagle Valley head coach Maggie Sherman said of her team’s confidence. “To have that to take from was really great. It was nice because I told the team we’re gonna have to weather a storm at some point, and I’m proud of the way we weathered it and kept our heads up.”

After the Steamboat goal, an Eagle Valley coach screamed to get the momentum back. The Devils did.

Just over a minute later, Eagle Valley sophomore Denilson Sandoval scored his second goal of the game, beating Sailors sophomore goalie Axel Kovach, who dared to wander too far from his net. When Kovach slid to snag the ball, Sandoval kept possession, getting a bit closer to the center before firing.

Sandoval assisted on the game’s first goal, credited to junior Armando Munoz. The pair were working with each other all night, exhibiting the way Sherman wants her entire team to play.

“We’re still trying to work on the team chemistry a bit,” Sherman said. “They have it, for sure. It’s just a matter of spreading it and having them work with other players and make sure we’re all connecting.”

Twenty-eight seconds after Eagle Valley went up 3-1, sophomore Seamus Phelan beat Kovach on the keeper’s right side, putting Eagle Valley up 4-1 at the half.

“If we could play a complete 80 minutes, like we did in the second 40, it would be much better,” Steamboat Springs head coach Rob Bohlman said. “At the fault to no one, the first half just wasn’t good enough.”

In the second half, another Caparrelli penalty kick fueled the offense. At the 14:45 mark, he lined up at the dash again. This time though, he kept the ball on the ground. Cameron read the shot right, diving for the ball and getting his gloves on it. Caparrelli’s shot had too much gas on it though, busting through Cameron’s clutch and into the goal.

That got the Sailors fired up. Balls flew wide on either side, high above the crossbar and between the football uprights, but none found net.

“It wasn’t good enough on our part, and I thought it was really good on Eagle Valley’s part,” Bohlman said.